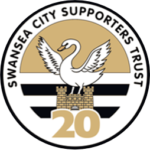 Back in 2012-13 Swansea City approached a landmark milestone in its history when it celebrated its Centenary year.

In September 2012, Swansea City celebrated an important landmark in its history when it celebrated its Centenary year. Throughout the course of its 100-year history, the club had been and continues to be a focal point in our community and an important part of our social fabric.

The club’s influence goes beyond SA postcodes and now reaches across the globe in terms of reach and fanbase.

In 2012, the Supporters’ Trust was invited to oversee an official project designed to commemorate the 100 years of the Swans, including through the development of a series of books and DVDs. This project, titled Swans100, would carry on throughout the season.

The Trust assembled a committee and launched an appeal to collate information, pictures and names to be included in the commemorative collections. The collections included the views and memories of supporters as well as past players and staff and incorporated a pictorial history of the club during its Vetch and Liberty Stadium years.

The committee invited contributions from all members of the Swans family, including those supporters who were in possession of interesting photographs, programmes, and memorabilia that could be used to illustrate the books. Upon successful scanning of the documents, all were returned to their owners for ongoing retention.

Trust Chair at the time, Phil Sumbler, said “One hundred years of Swansea City is something that the club is very keen to celebrate in the right manner. This particular project will form a small part of the official celebrations, but we are still keen to produce an extremely high-quality item that highlights the varied history of the club.”

In addition, the Trust worked alongside Swansea University to bid for and obtain Heritage Lottery Funding to create an online archive of supporters’ experienced over the previous 100 years. This project resulted in the creation of the website Swans 100– a detailed archive of many documents, images, and testimonies of our great club over the past century.

The Trust continues to gather information, documents, and images from our further decade of history and welcomes any additional content from members and fans to store as part of this archive.